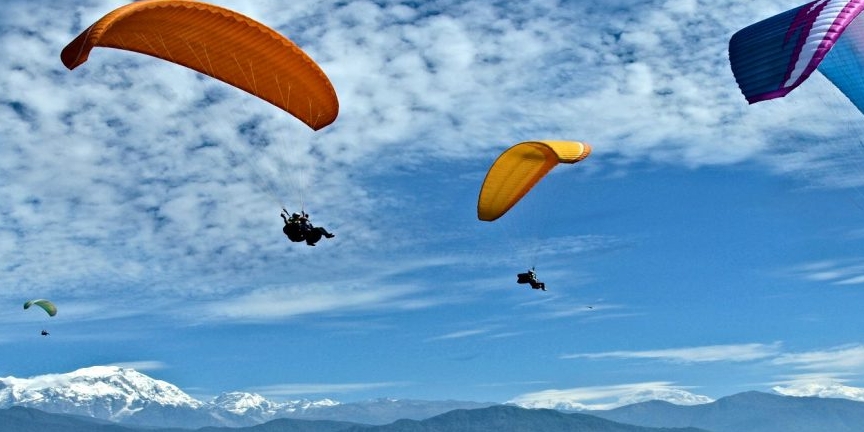 Have you finished trekking and tour in Nepal and looking for thrilling adventure in Pokhara?

Pokhara Paragliding will thrill you to make your holiday more memorable.  Pokhara is a city which is situated on the lap of Mt.Annapurna and Mt.Fishtail and also on Phewa lake in central Nepal. This city is also known as a gateway to the Annapurna Base Camp where visitors or trekkers go for a long tour. The trekker’s Paradise Pokhara is one of the top 5 famous paragliding locations in the world and the safety of large lakes and stunning mountain views. Paragliding in Pokhara can make your mind free of tension.

1.3 Is it safe to paragliding in Pokhara?

1.5 Best Time of Day and Season

Tandem Paragliding means the most enjoyable adventurous things in Pokhara. You can sit car-free and enjoy your surroundings, can take pictures and can also talk with the pilot who is helping you to make your journey most enjoyable and entertaining during the flight. It is quite comfortable from a large void beneath your feet.

Paragliding might not be in everyone’s life but some might be strong enough to fly over the lakes in Pokhara. There are around 20 paragliding  tandem flights company in Pokhara, and are providing paragliding  with fixed price. The total price includes transport and insurance.Standard flight(Half Hour)= 75USD

Flying On Your Own

If you are an experienced paraglider and want to fly on your own, you can get a permits from the civil aviation office in Pokhara then you can fly on your own risks. The permit costs (45 USD) for 15 days which you can renew if it is expired. You can make permit but it might take one hour.  You should provide them passport sized photocopy, visa photocopy, photo of yourself, proof of your insurance and your paragliding license then only you can get the permit safely to fly.

Is it safe to paragliding in Pokhara?

Generally, it’s safer to go paragliding in Pokhara than it is to cross busy in the intersection in the lakeside of the Pokhara valley. There are almost more than 250 flights a day during the season in  Pokhara. Flying in the sky without any safety isn’t a small risk of your body so you have a reserve chute and a lake for safety. However, it is an extreme adventure sport and risks sports and risks.  It involved and mostly biggest risk is during a take-off and while landing if there is a sudden change in wind which can take your life too. The government of Nepal has no system in place for regulating paragliding so it is the demerits of the paragliding in Nepal.

The paragliding flight takes off from Sarangkot(30 mins by jeep from Pokhara). It will be amazing adventure fly above Sarangkot for a while, then you can fly over whole Pokhara valley and lands on descent to Phewa Lake known as Birauta.

Best Time of Day and Season

Paragliding companies offer 3 flights a day,7 days a week:10:30 AM,12 PM,2 PM because it is the best time for looking the beautiful view from paragliding. By 11:30 AM, the thermals have become active so that it is easier to have flight at that time and if you want to get your money’s worth then, this is the perfect time to fly and can have the best feeling of happiness.

You should book a flight at least one day before so it will be easier to make a plan ahead. You have to deposite 20 USD  to have paragliding. They are providing booking facilities by phone, email or can visit a company a day before your flight.

Bandipur – Bandipur is between the way of Kathmandu and Pokhara. This is the picturesque Newari village atop a ridge popular for sunset and sunrise view. Bandipur village is the best choice to see beautiful sunset and mountain views.

Sirkot –  Sirkot is best for solo pilots because you can fly all the way to Pokhara, 2.5 hours, technical flight.